We went to my FIL's for a visit and for Penny to race around and generally act like a dog with his three dogs. I'll treat you to a few pictures; he has a pond, which she found immediately and had a happy time racing around becoming completely muddy filthy. She did NOT like the bath she had to take as a result....

I wish I'd gotten pictures of the glorious leaves; you can see them a little bit. I love this time of year most, even though (because?) it's so fleeting. 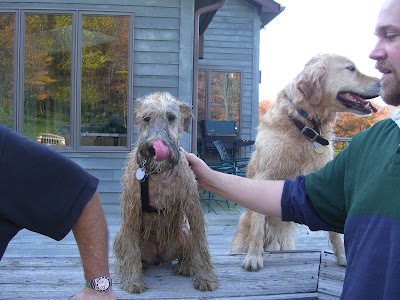 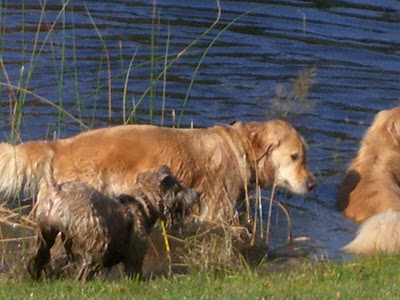 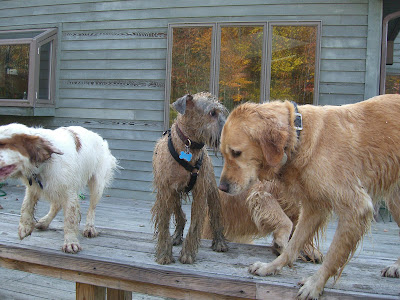 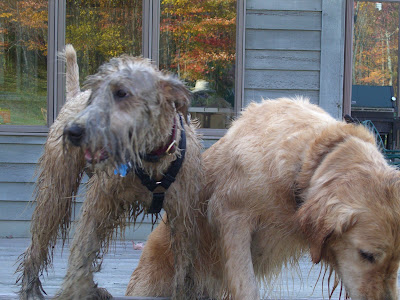 Tonight we'll have dinner with my dad, who's in town, and my 93 year-old grandmother, who still has a sharper mind than most people I know. She's been around a while (OBviously) and, as an aside, says that while she doesn't entirely like either candidate, she's voting for Obama. I laughed my head off when, before the VP debates, she said, "Maybe Sarah Palin will bring her baby up on stage to get a few more votes." How fantastic.

Enjoy the weekend, everyone!
Posted by die Frau at 12:23 PM

oh my goodness. i can't believe how big penny has gotten!!

and...way to go, grandma. you know how i like obama peeps.

Oh, happy dogs! Looks like such a great time.

Oooh, I love your babies! What is it about dogs that just a photo makes me happy?

Only the dirtiest baby is mine. The goldens and the clumber spaniel (the white one) are my FIL's.