Hi. HI! How've you been? Me? Thanks for asking. Weeeell, this was a trying week because I got a cold. (Big deal. Blow your nose, drug up, and move on.) Weeeeell, not so much. According to my gorgeous, wonderful, brilliant OB, I could indeed take certain types of cold medicine, including Tylenol PM. This helped. Tremendously. The downside is that my little system doesn't have quite the immunity it usually does, so this sucker has lasted me the entire week. Fortunately, misery loves company, and T had it all week as well. Plus, I have found that I get a heck of a lot of sympathy and extra kindness for being pregnant. I don't take it for granted, but I won't deny it if it's given.... I figure I tend to push myself pretty hard most of the rest of the time, so taking nine months of my life to take it somewhat easy is acceptable.

On a much lighter note, last week we did some great around-the-house stuff that, while not major, made major changes. I realize how I've come to a certain point in my life where light fixtures and sofas and faucets can make my week, which I never saw happening. But then, I never thought I'd get excited about going to bed at 9pm. Does that mean I'm a grown-up? At any rate, we've had the same light fixtures since we moved in, meaning the previous owners' choices. I think they got those lights sometime during Reagan's presidency. His first term. [Shudder] But we pooled our Christmas money and got new overhead lights for the kitchen, T's man room, and our bedroom. I don't know if you've ever done this for yourselves, but it changed the whole dynamic. They're glorious. It's as if we repainted the rooms. Here! I'll show you! (I don't have comparison shots; I'm sorry. We threw them out. Trust that they were ugly.) 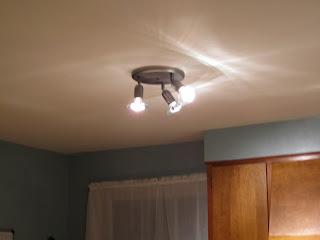 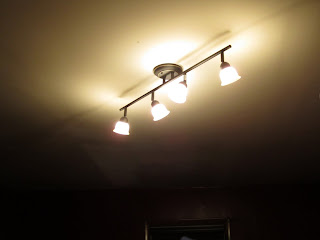 We don't have the bedroom light up yet, but I'm sure it will be life-changing as well. We also had help from a handyman at T's work who helped (IE did almost everything because we don't know doodly about it) us redo the plumbing for the kitchen sink--good thing, because the old metal pipes leaked and were so soft that T could squeeze them and dent them with his hand. We also got new fixtures: 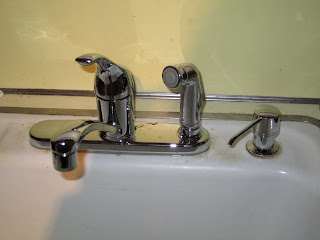 So shiny! Now we have a working sprayer and a soap-dispenser!
I feel like a Rockefeller!
Finally, the new sleeper sofa. We inherited one from my stepdad R which is now going to go to a charitable cause at school. It had a good, long life, but we figured since the guest room will now become the baby's room, we need a nice new sleeper for guests--and it's downstairs away from a potentially crying baby (or parent, depending on how long the baby's kept us up). This sofa is a gorgeous, buttery, dark brown and it looks perfect in the room: 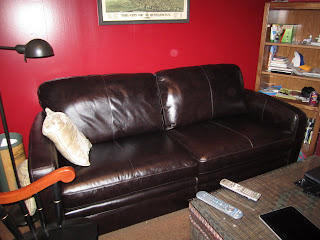 Doesn't it look nice against the red?
Not bad, huh?

P.S. My sister M is due THIS WEDNESDAY and we find out the sex of our baby TOMORROW.
Posted by die Frau at 7:50 AM

These are excellent changes! Very pretty.