Thank you, Amalah, for the inspiration for this post.

On Thursday I did my glucose test for gestational diabetes (extremely routine, for those who don't know). First of all, good thing I spoke with sister M beforehand because she told me I had to sit there for an hour afterward while the glucose...did its thing. That's how a number of our conversations have gone during this pregnancy:

M: Well, you have to do X/you can't do Y/did they tell you about Z?

Me: WHAT ARE YOU TALKING ABOUT? We have the same doctor! Why don't they tell me ANYTHING?

M: Did you ask them about it?/One of my friends told me.

Me: Oh, well, [rant rave calm down eventually]. Glad you told me.

Thank God she did this...she has saved my bacon more than once. Hence, I took a book to the Quest Diagnostic lab where they run all sorts of fun medical, blood work-involved tests. Went to the one nearest me where they informed me that I couldn't do the test because it was 3:20 and they closed at 4:00. Then she told me I better hurry to the next nearest place, gave me vague directions, and left the room. And I left my insurance card there. FYI: Don't try calling a medical diagnostic lab anywhere close to closing time because they will not pick up the phone. Shocking.

Fortunately I did get into the next place, and the woman who gave me my sugary orange glucose drink was lovely and reassuring. So I got to sit in the dingy waiting room for an hour, a room filled with numerous men. That wouldn't have mattered so much had the TV not been tuned to Oprah, whose happy topic dealt with men who had been molested. Not awkward at all. Thus I tried to dive into my book and ignore the story about the twins whose priest had singled them out for five years while they served as altar boys. Not kidding. (I'm glad she did the show; I know many men probably needed it, but I felt a sort of desperation to turn it to Ellen and see what silly game she was playing with some attractive male actor guest.)

One hour and three vials of blood later, I headed home. I realize now doing this test probably accounted for me falling asleep at 8:30: I was crashing hard from the sugary concoction, which reminded me of childhood birthday parties drinking Kool-Aid out of little Dixie cups. I find out at my next visit how it all panned out; meanwhile I will attempt to stave off my craving for Cadbury eggs, which I love even when not pregnant. We'll see how that goes.

Ah, and here's my latest bump picture, taken about two weeks ago. I should just take another because I know he's gotten bigger since then. I've also begun exposing him to music via headphones on my tummy. T said we should start him out on funk, but I thought we should ease him in with the Beatles. However, rest assured he will be funkified at some point. He'll be the only three year-old who can identify George Clinton, Soulive, and Lettuce. I love it. 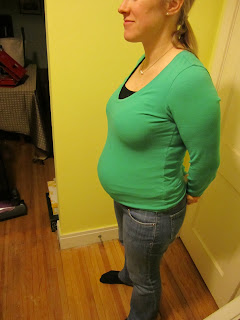 Your sister sounds like an excellent pregnancy resource. Nice. Also, did I tell you about the time we were in Ikea & my friend's 5-year-old goes, "Mom, I think this is the Talk Heads." Damn, that was cool.