There's no other title for it. I warned Ouiser several times this was coming, and here it is. Everyone has their images of snow; it was even a (terrible) song in White Christmas. We think of the perfect looking pine trees, softly falling in the night, and often it does look like that. Snow can be beautiful. It can also be gray and hard as a rock, but that's mostly from highway travel. I much prefer the former to the latter.

When you live where I live, you get used to some form of snow arriving possibly as early as Halloween and as late as May, one year. Probably April. So yeah, we're pretty used to snow here in WNY. It has many forms: wet, powdery, heavy, slushy, sticky, pretty, and thick, to name a few. One becomes quite the connoisseur, uttering statements such as:

"This is great for snowball making! Packs well and doesn't stick to my mittens too much!"

"Yay, the light kind--makes shoveling easy!" (We have ergonomically correct shovels. Makes it easier for the back, you know.)

"Ugh, wet and heavy--better move the car from under the tree [so when the snow snaps the branches, they will not damage your car, which actually happened to me because the snow weighed 12lbs per square foot]."

I tend to measure snow in terms of whether or not Penny can run through it, or if it's deep/messy enough that I have to wear boots instead of nice shoes. That reminds me of another typical WNY conversation on New Year's Eve day at the shoe store:

"I need to find awesome boots that I can wear in the slush. Do you have those?"
"Oh, yeah, they're leather AND waterproof. And they have this cute design on them."
"Screw it; I'll just get the fleece-lined galoshes that look like cowboy boots."

Snow is my life; I walk in it, play in it, drive in it. I will have you warm weather weenies know that we've gotten anywhere from 2-4 inches of snow every day this past week and never once did anyone think of closing the schools...for which every student and teacher was incredibly grateful. Or not. Truly, it didn't even occur to anyone that anything might close. My city goes through anywhere from 40,000 to 50,000 TONS of salt every year for winter. One of our first acts when we bought our house was to secure a plow guy, whom we love dearly.

The best part, though, is the skiing, snowmobiling, and sledding, which DH and I did last year. There's a great run near our house and we were the only ones there without children. Didn't stop us from making serious runs--and let me tell you, it's quite the workout slogging the sled back up the hill when you're dressed like Randy from A Christmas Story. It is also still fun to throw yourself in a pile and make a snow angel, even if you are over 30.

And then there's the serious side: We had to buy a roof rake, a 25 foot long metal rake with a large scraping blade that helps get snow off the roof. You never realize these contraptions even exist until the dining room begins to leak, as it did last year. Those icicles are not just for covering with food coloring and eating, people!

So here are a few of my better pictures, taken yesterday. Enjoy and stay warm. And slow the hell down when you're driving, turn into a skid, and pump your brakes. Thank you. 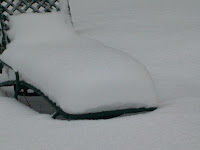 We forgot to take in the lawn chairs. Whoops. 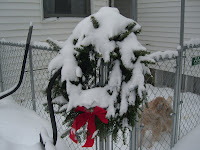 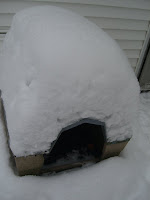 Just to give you perspective on how much we have 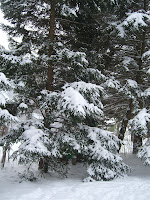 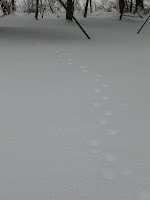 Deer tracks through our yard 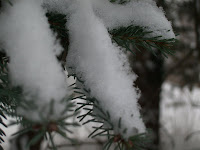 I think the best part is either walking as it falls silently around me, catching the light no matter the time of day, with the covered hush of sound that only winter can bring; or sitting inside on a snowy night as the wind howls, with warm cozy clothes on, a fire in the fireplace, comfort food, and people I love. You just can't get that at any other time of year, which is why I still love the snow, no matter the mess it makes. I guess that's why I live here.
Posted by die Frau at 12:33 PM

Can I tell you a funny story? The *entire state of Colorado* owns 75 plows. Yup. You read that correctly. 75. And they don't salt anything, anywhere. Driving in two inches of snow here is more dangerous than driving in a foot in Buffalo (trust me, I've done both!). I'm willing to bet that your township owns at least 75 plows and the greater Buffalo area owns somewhere in the 6 figures!