Yesterday in my book group we were discussing the poem “Codicil” by Derek Walcott that had the line “To change your language you must change your life”, and it sparked this enormous discussion. What does that really mean? What do we mean by language? There’s the idea of code-switching, IE You don’t always speak to your friends the same way you speak to a superior at work or your grandmother or an interviewer. Does that make a person insincere, or does it mean she just knows her audience? This led to us mentioning Atticus Finch (OK, it was a room full of English teachers, bear in mind) and the fact that “he’s the same inside his house as he is on the public streets.” Does that mean he has more integrity and sincerity because he acts one way? What do all of you think?

This also led us to talk about actions versus intentions. Which follows the other, or do they come about simultaneously? When you make a change in your life, do you have the intention first and then commit the action, or the opposite? Some said that we really do the action first and then it becomes our intention. I mentioned it to DH, who pointed out that you have to have a certain amount of sincerity involved, meaning that people’s actions and their intentions do not always gel. You’ll have a person who says she meant one thing (intention) but in reality, she had another motive in mind when she acted. Does that make sense? Let me know if it doesn’t. 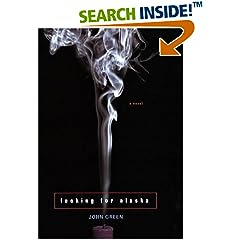 On another English-related note, a local Buffalo area high school has received press because a handful of parents have protested the use of the book Looking for in an 11th grade class. The teacher sent home permission slips telling the parents about the fact that the book has some explicit language and a few sexually explicit scenes (very few; they’re certainly not the focus of the novel). 97% of the parents signed the form; the other 3% have gotten into an uproar, calling the book inappropriate and pornographic. Mind you, none of the objectors have read the novel. One of the most vocal women does not even have a student in the class.

I cannot stand this sort of hypocrisy. In my experience and in speaking to others, I have found that most parents who object to books read in school have not read them; they have only heard about them from others. They then take the moral high ground, making it difficult for teachers and students alike. If you to go the (American Library Association) and look at the most commonly banned books, some will have you mind-boggled. Oh sure, Harry Potter I understand—although vehemently disagree with—because of the Satanic witchcraft it obviously supports and encourages kids to practice (sarcasm noted?), never mention the fact that Rowling got MILLIONS of people reading. But others, like the Anastasia Krupnik books by Lois Lowry, I cannot understand.

Everyone has the right to his or her opinion, but with regard to school texts, teachers, for the most part, take a great deal of care to expose (pun slightly intended) their students to a variety of texts, and some may actually imitate certain portions of real life. However, they also take great time and care to ensure the students read appropriate, insightful material. Bottom line, have your opinion but make sure it’s an informed opinion. Otherwise, you’re complaining without merit or anything substantial to back yourself up. OK, climbing down off the old soapbox now. I could’ve kept going but wanted to spare you all. :-)

And wasn't LOST bizarre? I love it.